In the 1950s two drugs called chlorpromazine and reserpine were found to be helpful in alleviating the symptoms of schizophrenia however, both drugs also induced tremors and muscle rigidity. These side-effects are symptomatic of Parkinson’s disease, a condition caused by low levels of dopamine. At this point, it became clear that schizophrenic symptoms may be linked to high levels of dopamine or hyperdopaminergia however the causes were unclear at this time. 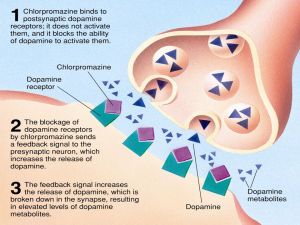 Research into the function and impact of various anti-psychotic drugs led to some important breakthrough but it also became clear that some people with schizophrenia exhibited low levels of dopamine!

In 1991, Kenneth Davis suggested that positive symptoms of schizophrenia (e.g. delusions and hallucinations) may result from excess of dopaminergic activity in a region called the called meso-limbic pathway whereas the negative symptoms (e.g. flat affect and mutism) may result from hypodopaminergia, meaning a lack of dopaminergic activity in the meso-cortical pathway, (see image below).

Moving on from the dopamine hypothesis…

By the 2000s, research had begun to focus on the role of other neurotransmitters including GABA, glutamate and serotonin (see p 000). Attention had turned to a new drug called clozapine which binds to D1 and D4 dopamine receptors, but only weakly to D2 receptors. This drug is an effective anti-psychotic, therefore calling into question the D2 hypothesis. As this drug also binds to serotonin receptors and greatly reduces both positive and negative symptoms of schizophrenia, it was hypothesised that negative symptoms may be caused by irregular serotonergic activity. Research now began to focus on the interactions between neurotransmitters (see p000) and in this case, it is worth noting that serotonin regulates dopamine levels in areas such as meso-limbic pathway.

Back to dopamine again!

Version 3 of the dopamine hypothesis

Oliver Howes and Shitij Kapur (2009) describe ‘dopamine dysregulation’ in the striatum as the common pathway to psychosis. These researchers have also suggested that attention be turned to presynaptic dopamine levels as opposed to irregularities of D2 receptors. They also focus on interactions between genetic, environmental and socio-cultural factors and believe that the dopamine hypothesis should be softened and viewed as an explanation of “psychosis proneness” not an explanation of schizophrenia.